You are welcome to another educative page of the SureSuccess.Ng website. Today, we are going to learn about Apology Letter to School Principal. We shall examine what it is, the need for it, how to write it, who can write it and how to send or deliver the letter.

Generally speaking, an apology letter is a physical document or email that acknowledges a mistake or occurrence, expresses regret and asks for the letter recipient’s forgiveness. [An apology letter may be written to your Teacher, Headmaster/Headmistress, Head of Department (HOD), Dean, Boss, Employer, a Superior in the office, girlfriend or boyfriend.] An Apology Letter to school principal may be written by a student or parent or teacher to the principal to express their regret towards a past mistake or occurrence.

The idea of an apology letter is to thoughtfully put down in words how you are feeling about a mistake or negative action and a medium of trying to make a positive change from the negative action.

Read Also: How to Write Letter of Attestation [See Samples]

Most of the times, when a student or teacher commits an offense or breaks a certain rule and needs to write an apology letter; they have a hard time figuring out how best to put their thoughts and feelings down on paper in a way that would be acceptable and not cause further damage.

This is exactly the reason why we are writing this tutorial. As you read further, you will be guided on how best to word and format your apology letter in order to elicit the much needed understanding and forgiveness from your school principal.

Who can Write an Apology Letter to Principal?

Depending on the offense committed and the circumstances surrounding it, an apology letter to principal can  be written by:

What offenses may require Apology Letter to Principal?

There are many mistakes or offenses that a student or teacher may commit that would warrant the need to write an apology letter to the principal. Such offenses include: cheating in an examination, breaking school rules and regulations, breaking or damaging school property, beating or bullying a fellow student, drinking alcohol, low class attendance, absenteeism, smuggling of phones or pornographic materials into the school/dormitory, skipping classes, not returning a book borrowed from the school library, missing an examination, poor result/performance, not attending PTA meeting (parent), etc

Read Also: How to Write Letter of Undertaking

How to Write an Apology Letter to Principal

The first thing to bear in mind is that an apology letter to principal or any other letter intended for the principal of a school is a formal letter. So you must address and structure it like a formal letter. After writing the addresses and greeting, write the title of the letter. Then,

1. Take some time to think and make a list of the mistake(s) you want to apologize for.

If you think well and articulate what you did wrong, you will be in a better position to appreciate the gravity of your offence and figure out the best way to express your regret towards it. If you write as one who does not understand the depth of the mistake you made and how your principal might be feeling about it, you may end up using expressions or saying things that would elicit an undesired response from your principal. This is very important and requires due attention.

2. Make a draft of the letter.

This is very advisable as far as formal letter writing is concerned. If you have satisfactorily observed step 1 above, you are now ready to express your regret over the mistake you made and ask for forgiveness. So just go ahead and make a draft of the letter before proceeding to make a final copy. In writing your letter, make sure to include, in very clear and simple terms, all that are necessary for your apology. This should include mentioning the mistake and saying you are sorry, explaining the cause of the mistake (not in a way that makes you appear defensive) and explaining how you intend to avoid the mistake in future.

3. Write the final copy of the letter.

Writing the final copy entails moving the draft into the document you intend to deliver to the principal. As I have already pointed out before, this final copy should be written in a formal letter format. This implies that you must take into account all the corrections on the draft paper including those made to your spelling mistakes, punctuation mistakes and grammar. The final copy should also include your full names and signature at the end.

How to Deliver your Apology Letter to Principal

Even though technology has made sending emails one of the easiest, quickest and most convenient form of passing an apology, you must note that the best form of sending a letter of apology is handwriting it and delivering it to the recipient by yourself.

Below are a few points which you need to consider in order to successfully deliver your Apology Letter to Principal.

1. Seal the letter in a good-sized envelope

Write the name of the principal (recipient) on the envelope.

2. Deliver the letter by yourself

While it may be convenient to want to deliver your apology letter via a friend or a teacher for fear of shame and embarrassment, delivering your apology letter by yourself is the best way to sincerely express your regret. If you could be confident enough to deliver your letter, not just by yourself, but with a sincere smile, you will easily attract the forgiveness you seek. Remember. If the principal is not on seat at the time you are delivering the apology letter, the best thing to do is to wait for the time he will be in and give it to him.

3. Do not demand a response there and then

You must bear in mind that the principal may receive the letter of apology and not give any response at that moment. Do not stand there to demand a response, whether verbally or otherwise. You can go your way and wait for the response to be communicated to you. Sometimes, the response may never really come. If that becomes the case, be rest assured that you have done your part by tendering an apology. All you need to do is to continue striving to live up to your promise of ensuring that you do not repeat the same mistake.

See a Sample Formats of Letter of Apology to Principal 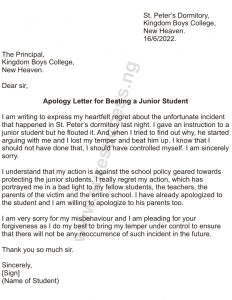 Read Also: 3 Simple Steps to write an Essay on “Why I deserve a Scholarship”

HENRY DIVINE is a dynamic young man with a vision and passion to affect his generation, especially the youth. He is an author, a psychologist, a blogger and the Initiator/Coordinator of The Sure Success Project.
Previous 2023 JAMB Accredited Professional Testing Centres (PTC) and Professional Registration Centres (PRC) in Nigeria
Next UNN Releases 1st Supplementary Admission Lists for UTME & Direct Entry Candidates – 2020/21 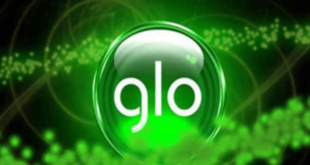 This post is about how to link NIN to Glo Number. So I will be … 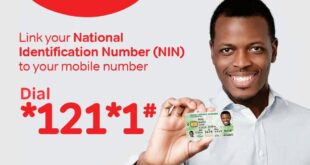 This post is about how to link NIN to Airtel Number. So I will be …